There’s something beautiful that happens when good things happen to good people, especially when their hard work pays off. Such was the case of James Matthew Besa, who identifies as a nursing student of cis color. Her genuine, caring character and commitment to the field of nursing was recognized last year with the Margaret A. Evans Memorial Fellowship. The encouragement and financial support from this award came at a time when James desperately needed it to help him fulfill his degree requirements.

Margaret A. Evans spent her time compassionately caring for her parents and others with illnesses and ailments. The way she lived her life inspired her doting husband, Bernie, to create a scholarship in her name for students who emulate her sweet and cheerful attributes, which she maintained even through the hard years of depression. Bernie created the award after Margaret’s death in 1981, but her legacy lives on through the lives she touched and the 111 (and counting) University of Victoria nursing students who received the award at this day.

James’ values ​​fundamentally match Margaret’s. From an early age, he also cared passionately about people, animals and the environment. He joined his mother in Nelson, British Columbia in 2016 after immigrating to Canada from the Philippines. Driven by his desire to help people and his remarkably sunny outlook on life, he decided to pursue a career in nursing.

Nursing is the art and science of caring. If you look at what we have to do each day and can do it with kindness, then everything that follows will be positive.

Moving to Victoria as an international student posed several challenges, so James enrolled in the Selkirk College-UVic Partnership Program. This allowed him to stay in the Kootenays with his family and helped alleviate some expenses. Before nursing school, he worked two jobs to help pay for the program. Once school started, James was determined to do whatever it took to become an excellent nurse and he dove headfirst into learning.

Unfortunately, he hadn’t realized that his remote location would require him to travel far from home for his internships. The scholarship helped James overcome this obstacle. “Receiving this award gave me some financial freedom. $2,000 is a lot for me,” says James. He used the scholarship money to buy a reliable vehicle so he could travel safely at his internship 90 minutes away.Working four days on three days off, he fitted the car with a mattress and heater so he could spend the night there and save commuting time between long shifts . 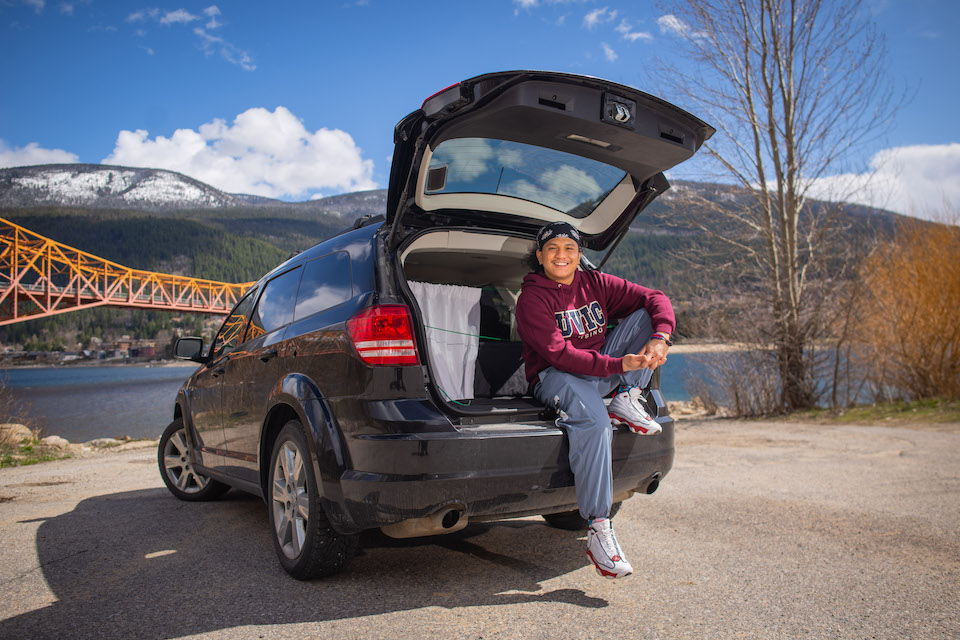 James’ compassionate nature and dedication to helping others shines throughout his academic and professional journey. For most of his studies, he also worked as a student nurse in a long-term care facility. “Dementia care, palliative care and end-of-life care are hard enough to do, but I love the atmosphere of home while doing your job and being able to build strong relationships with my patients.” He is also very interested in the developing field of environmental nursing and in exploring how the environment affects the mind, body and soul.

During school, James also advocated on behalf of his fellow students to fight systemic racism. Having experienced racism firsthand after moving to Canada, James is proud to have channeled that negative energy into positive action. He served as Chair of the People of Color Caucus for the Canadian Nursing Students Association and has published his own research, The Diversity Integration Project. “My goal in doing this project is to inspire other nursing students like me to challenge social injustices in nursing programs and in society at large,” says James.

So what’s next for James? After graduating, he plans to work in underserved communities in British Columbia with the goal of one day working for the World Health Organization. Regardless of job or organization, her ultimate dream is simple: “I want to advocate for people like me and make a small difference.”

Unemployment assistance for millionaires has skyrocketed during the pandemic