Rishi Sunak has stepped up his warnings to the UK oil and gas industry that unless companies announce increased UK investment plans ‘soon’ they will face a potential tax on their profits .

The British Chancellor is under pressure from his political opponents – and some prominent members of his own Conservative party – to impose a single tax on energy groups, which have seen their profits soar thanks to rising gas prices.

On Tuesday, Labor used a debate over the recent Queen’s Speech to force a vote in the House of Commons on whether to impose a windfall profits tax – a move by the Opposition aimed at underscoring the reluctance of the government to impose one. The vote was lost by 310 votes to 248.

Although the motion was not supported by a single Tory MP, Tory benches are concerned the government has failed to convince the public it is doing enough to tackle the cost of living crisis . According to a new YouGov poll, some 72% of Britons think the government is mismanaging the economy.

For months Sunak has resisted the idea of ​​a windfall tax, arguing it could discourage investment in the North Sea at a time when the government wants to bolster the UK’s energy security. Yet in recent weeks, as companies smashed analysts’ earnings forecasts, the Chancellor has changed his language.

Now he has made it clear that unless companies such as BP and Shell increase their investment targets for the UK beyond existing plans, he will hit them with a levy. Funds raised could be used to help alleviate the growing cost of living crisis.

Ed Miliband, Labour’s shadow energy secretary, told the House of Commons that Sunak’s resistance to a levy made no sense given that previous Tory governments had levied windfall taxes. Margaret Thatcher’s Conservative administration raised taxes on the oil and gas sector in the 1980s and hit the banks with a windfall levy in 1981.

Sunak told MPs he would take a “pragmatic” approach to the issue. “What we want to see are energy companies that have made extraordinary profits at a time of extremely high prices, investing those profits back into UK jobs. Growth and energy security,” said the Chancellor.

“But as I’ve been clear, and as I’ve said many times, if it doesn’t happen quickly and on a large scale, then no options are on the table.”

The Chancellor said it was ‘irresponsible’ to suggest he had not taken action to help people cope with the rising cost of living as inflation soared.

He told MPs the government had cut fuel taxes, given council tax rebates to millions, cut the Universal Credit sliding rate and increased the warm house rebate. “This government has always acted to protect this country in times of challenge,” Sunak said. 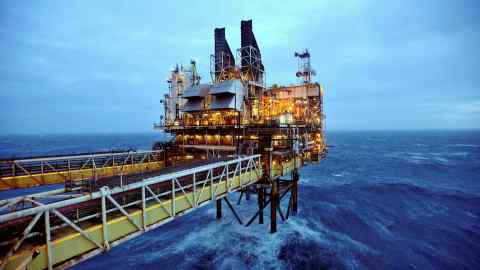 But he added that the causes of the rise in prices were global in nature and that “no honest chancellor” could tell the public that they would not rise further. “There is no action any government can take, no law you can pass, that can make these global forces disappear overnight.”

Household energy bills in Britain are set to remain high, despite regulator Ofgem’s proposals to review the country’s energy price cap every three months so that any drop in wholesale prices can be passed on more quickly on consumers.

Energy consultancy Cornwall Insight said on Tuesday it expected the price cap to rise from over £600 when it is next amended in October, to over £2,600 per year per household in average.

Mel Stride, chairman of the Treasury Select Committee, said on Monday he thought “there was a case” for a windfall tax.

Robert Halfon, chairman of the education select committee, said he would abstain in Tuesday’s vote. He said the government should consider a one-off tax, arguing that oil companies “are not making the leap [fuel duty] pump cuts, [and] they take forever to lower the price when the international cost goes down”.

Meanwhile, Kwasi Kwarteng, the business secretary, has written to petrol retailers urging them to pass on the recent 5p per liter fuel tax cut to customers as soon as possible.

Kwarteng said in his letter that the government had asked the Competition and Markets Authority, the regulator, to ensure the industry ‘does not breach competition or consumer law “.

‘It’s a mess and I’ve never seen anything like it’: Global lost luggage crisis worsens | Travel