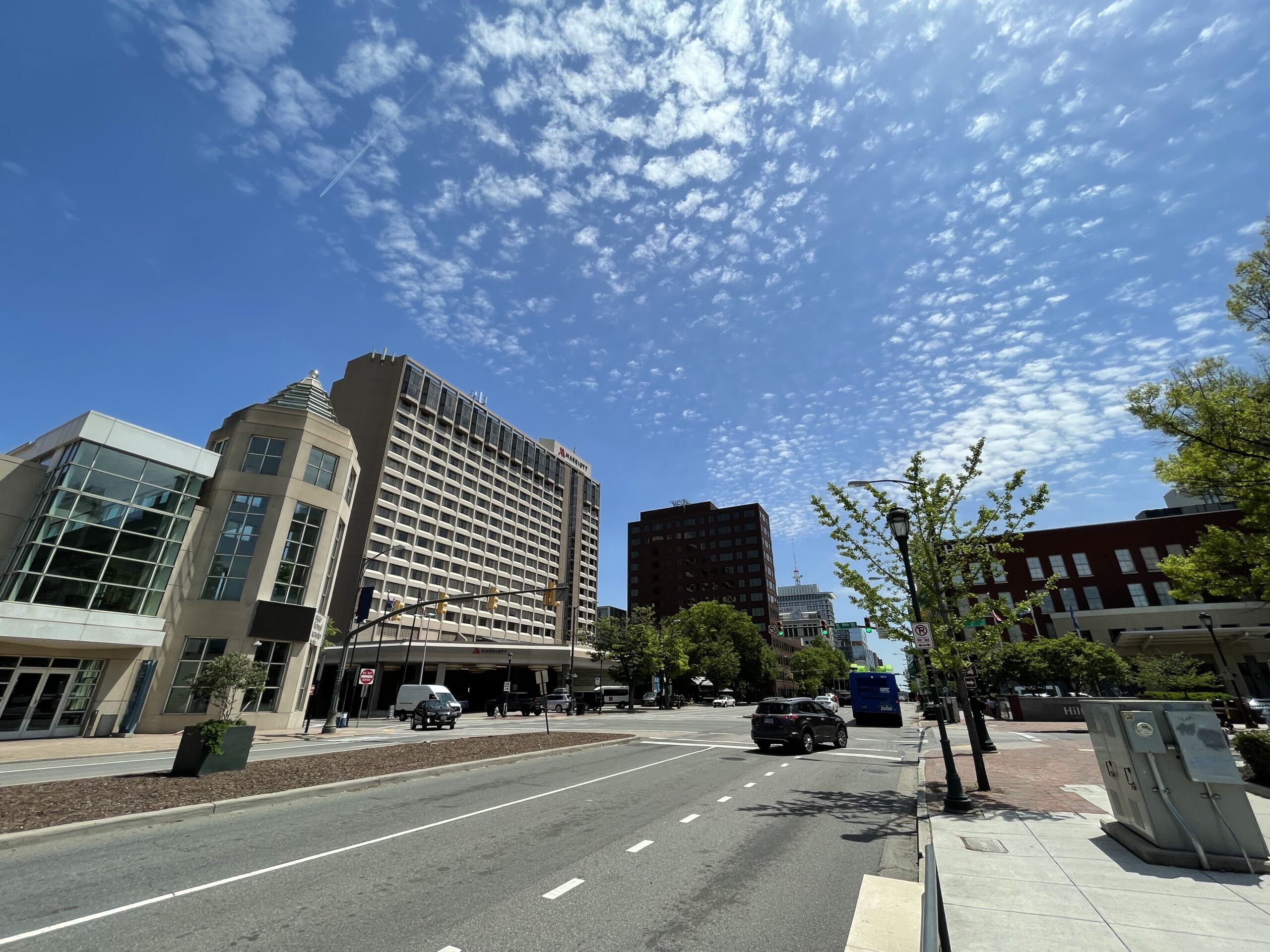 The Greater Richmond Convention Center and the Downtown Marriott are located at the intersection of Fifth and Broad streets. (BizSense File Photos)

An overnight trip took me earlier this month to our country’s capital, a place I know quite well from my frequent visits to friends and family. This time, I stayed in the West End of the city, an area I had never heard of let alone spent a night. The beautifully maintained pocket is wedged into the city center north of Foggy Bottom and George Washington University and Medical Center, southwest of Connecticut Avenue and DuPont Circle, and east of Rock Creek Parkway. Its manicured sidewalks are lined with architecturally sharp glass-fronted office complexes and well-designed condominium buildings.

The morning after the event I had attended, I avoided hotel room service and went out in search of some breakfast and a taste of the immediate surroundings. What struck me right away were the many luxury hotels, especially since neither major museums nor historical attractions, nor the Washington, DC Convention Center are nearby. There was the Park-Hyatt Hotel surrounded by densely planted tulip borders that screamed red and yellow if not Amsterdam. Across the street was the Ritz-Carlton, where expensive cars disappeared and appeared to and from an underground garage. I walked past a Westin and saw a Marriott. Leaving Chef Geoff’s cheerful cafe where I had coffee, eggs and bacon, I realized the bistro was set up in a Hilton. And while I didn’t see any old churches or synagogues, a handful of sturdy 19th-century brick townhouses still lined the sidewalks, proof that this was a middle-class neighborhood.

But why the plethora of posh hotels?

Back in Richmond, I did some research and discovered that the West End redevelopment was the result of the efforts of the Washington, D.C. Department of Planning and Management from the early 1970s through the 1980s. DC Metro was then under construction, and planners sought to increase the number of residential units (and the related increase in ridership) at a time when many households were heading to the suburbs. The neighborhood was previously home to light industry and a predominantly African-American population (jazz great Duke Ellington was born here in 1899). But when a quirk in 1970s city code counted hotel rooms as residences, developers built hotels in search of steady cash flow and increased profits. From what I have seen, the 1990s and 2000s brought continued prosperity to the West End.

A few days later, as I walked along East Broad Street from Richmond downtown to the intersection of North Fifth Street, I thought: this place looks terrible. Visions of DC’s chic West End were in my mind. It’s a shame that this busy intersection, fueled by car traffic from Highways 95 and 64, is the first impression and only experience for many visitors here. 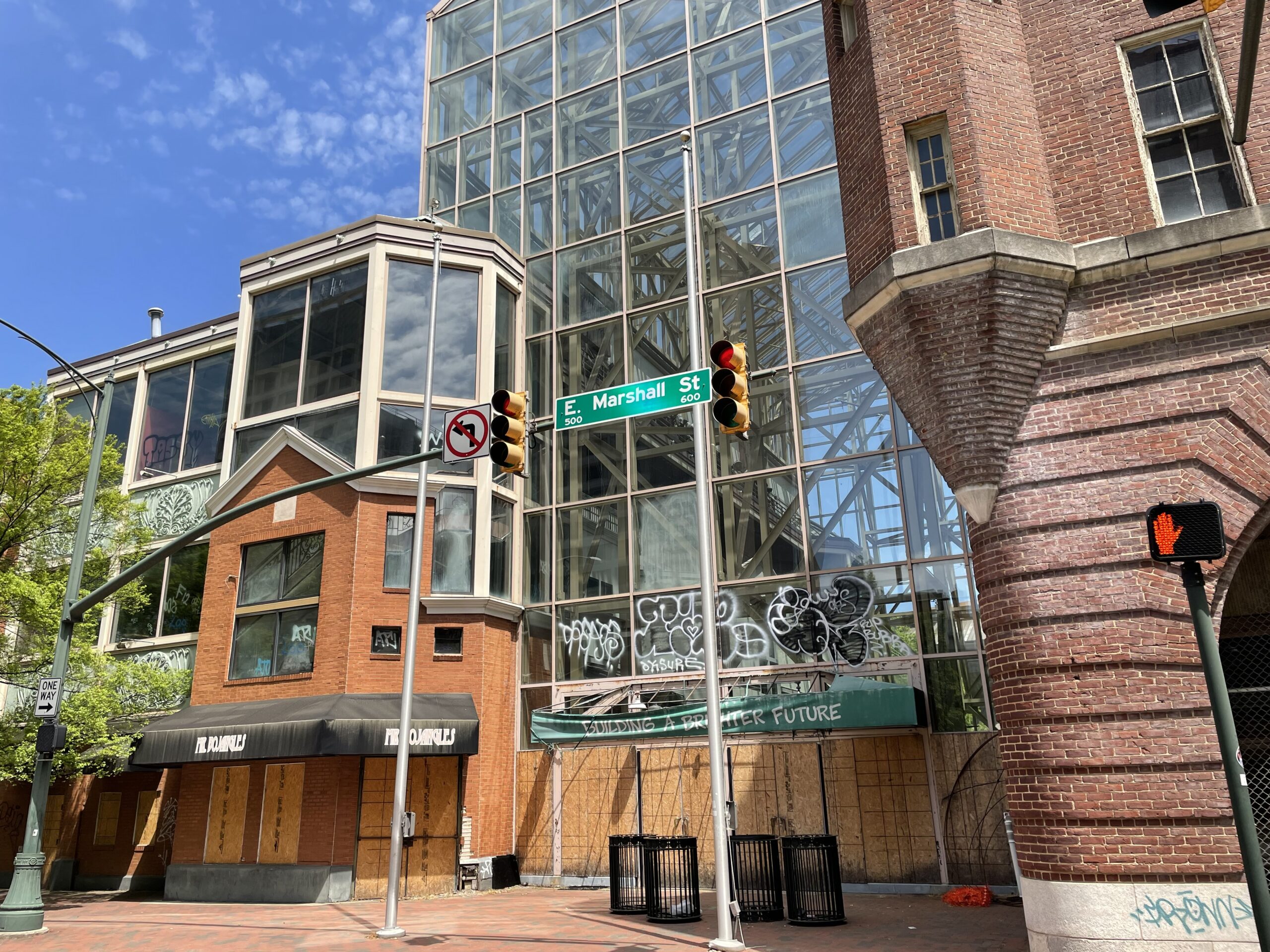 The northwest quadrant of the crossroads is marked by the disappointing architectural design of the Greater Richmond Convention Center. The giant has no major entries from Broad and a digital sign displays the word “Pepsi” and sometimes “Help Wanted” for jobs at the center. Worse still, the Marriott hotel across the street has an exterior that appears to be covered in a polystyrene derivative. The hotel occupies the entire 500 block of East Broad, but is located too far from Broad to establish a solid urban wall. Nor is it distinguished by the hodgepodge of vehicles obstructing its engine inlet. Parked cars and trucks almost encroach on the city sidewalk. The outdoor parking situation across Broad at the Hilton, which occupies the former Miller & Rhoads department store (in clever adaptive reuse), is equally messy. There, the landing stage for vehicles is indistinguishable from the large surface car park into which it empties. Two small cherry trees and a low brick wall along the property line are hardly considered landscaping.

Meanwhile, the wide dirt median strip of Broad Street that connects the hotels is devoid of any living things (OK, worms maybe). I guess we can be happy that the thick, fresh mulch doesn’t grow weeds so early in the spring, but hey, isn’t Virginia Historic Garden Week happening this month? Couldn’t the city of Richmond and the hotels have found a thick, colorful blanket of tulips, irises or impatiens here?

On the fourth corner of Broad and Fifth is an unsightly surface parking lot, one block long. The town’s narrow sidewalk on its western edge at Fourth street has become the front yard for residents of the 11-story Grace Place Apartment building at Fourth and Grace (which was recently cited for code violations). Between 10 and 30 people congregate here throughout the day and evening. Can park benches be placed here for convenience and comfort as foot traffic is challenged as conventioneers walk from Broad to the theater or casual and fine dining restaurants that now define Foushee’s East Grace in Sixth Streets?

Richmond’s “gateway” to Broad and Fifth is a civic embarrassment. Thousands of visitors pass through here on their way to hotels, shows at the Dominion Energy Center, an event at the convention center or other destinations. Should we also mention the padlocked Colosseum that is encircled by a chain-link fence, or the shuttered, graffiti-stained food court of the defunct Sixth Street Marketplace? As we turn our attention to the development of the Diamond District, the mayor’s office, city planners, the Venture Richmond organization, convention center staff, hoteliers, and officials from the Commonwealth of Virginia and Commonwealth University of Virginia join forces to create a “Welcome to Richmond” zone and turn this horror into a worthy endpoint?

Imagination and commitment are essential. And parking will be critical. A large residential structure would be considered for the surface car park in the 400 block of East Broad. Can this complex be designed with a large public car park deep in the basement of the city center?

It would be nice to go home and not dread this unsightly crossroads in the city center.

When is the best time to buy stocks? – Forbes Advisor