The Canadian labor market stagnated even as the unemployment rate fell to a new record low, hampered by a shortage of new workers.

The economy added 15,300 jobs in April, Statistics Canada reported Friday in Ottawa, less than half of the 40,000 gain predicted by economists. The small increase ended a surge that saw Canada add around 410,000 jobs in the previous two months.

The jobless rate fell to 5.2% in April – the lowest in data dating back to 1976 – as the economy failed to produce new labor force growth. 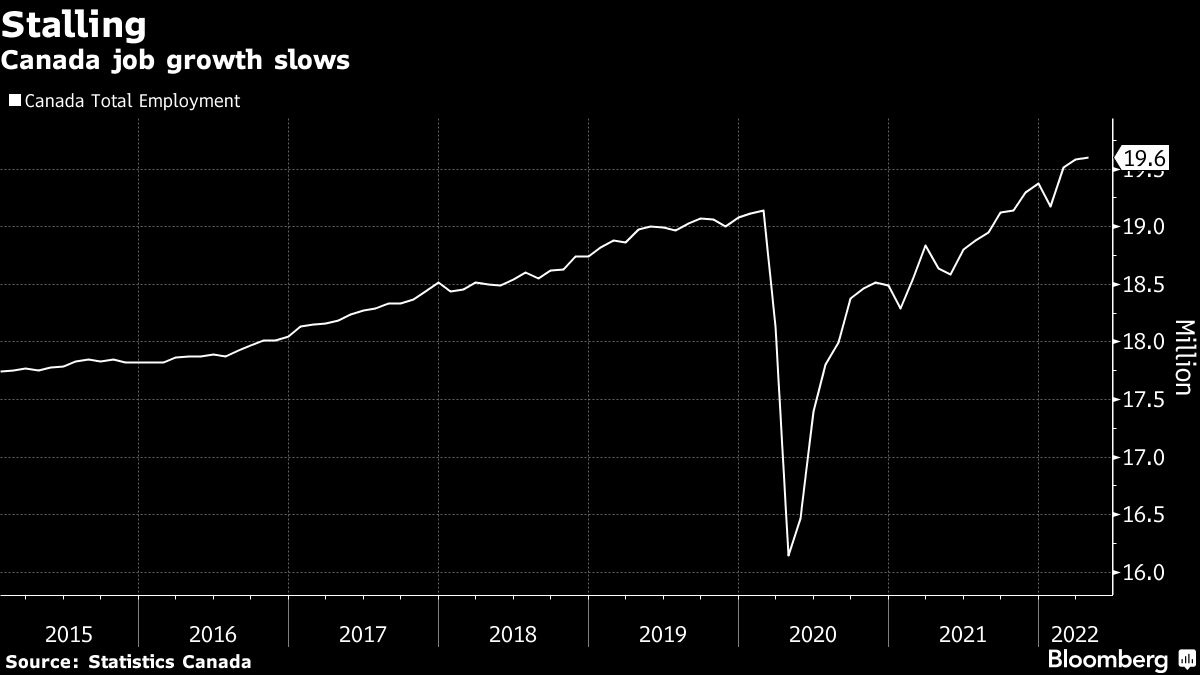 With employment already well above pre-pandemic levels, economists and policymakers anticipate a slowdown in job creation as the country struggles to find new workers, amid high employer demand. The imbalance between job demand and supply is one of the main reasons why the Bank of Canada is tightening its monetary policy. The Canadian economy has added nearly one million jobs over the past year, with nearly half a million jobs above February 2020 levels.

“It’s an indication that we are reaching a fairly mature stage in the economic cycle,” Josh Nye, senior economist at Royal Bank of Canada, told BNN Bloomberg television. “It’s going to be difficult to generate job creation on the scale that we’ve been accustomed to over the past year.”

The yield on Canada’s benchmark two-year bond fell about 4 basis points after the figures were released at 2.682% at 8:42 a.m. The loonie was little changed at $1.2836 to the US dollar.

Fears that the Canadian economy may not live up to capacity are fueling expectations that the Bank of Canada will aggressively raise interest rates in the coming months, including a half-point hike in its policy decision next month. The central bank has raised its benchmark rate by 0.75 percentage points since early March to 1%, and overnight swap trading suggests it will climb another 2 percentage points by the end of this year. .

Canada’s participation rate fell to 65.3% in April. Adding to evidence of market tightening, involuntary part-time employment rose to a record high of 15.7%.

The data also shows how the economy has been hampered by a rise in coronavirus cases last month, as the omicron variant swept the country. Hours worked fell 1.9% in April, in part due to an increase in COVID-related absences, Statistics Canada said.

Average hourly earnings rose 3.3% from a year earlier, little change from 3.4% in February. For permanent employees, salaries increased by 3.4%. The country lost 31,600 full-time jobs in April, which was more than offset by an increase of 47,100 part-time jobs.

Construction led the declines, with employment in the sector down 20,700 jobs. Service-related industries posted a gain of 31,400 for the month.

Fair Work has approved the “retirement” of penalty rates